The GI-MAP Test is the most comprehensive functional lab test to determine the root cause of your health issues.

Some conditions that warrant testing are:

The GI-MAP is designed to assess a patient’s microbiome with particular attention to microbes that cause disease or that disrupt normal microbial balance and contribute to perturbations in the GI flora and contribute to illness. With full PCR quantification, we can now see the level of infection thus, providing accurate, actionable clinical information. The results gleaned from this digestive profile help the clinician to provide personalised, targeted protocols to address gut dysfunction.

Additionally, the quantification of the levels of identified bacteria offers a useful ability to see how treatments are working because a retest can show whether a parasite has resolved, dysbiosis has improved, and more. 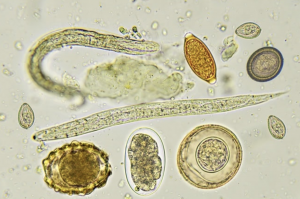 What is being measured?

The GI-MAP includes pathogens (bacterial, parasitic, and viral) commonly known to cause gastrointestinal infections. However the presence of a pathogen may not necessarily result in the presence of symptoms. Many factors, including the health of the individual, the transient nature of some pathogens, and the severity of the presence and expression of the pathogen can all influence whether symptoms will express and persist.

Studies show that nearly 50% of the world’s population may carry H. pylori. Many carriers show no symptoms at all, however, H. pylori is known to have a causative role in ulcers, chronic gastritis, and stomach cancer.

Additionally, in early phases of colonisation, patients may experience low stomach acid or hypochlorhydria. Over time, additional H. pylori strains may colonise, including those with Virulence Factors making the bacteria more harmful and increased disease potential.

Trillions of microorganisms inhabit the human intestine to make up a complex ecosystem that plays an important role in human health. The gut microbiota is diverse, varies among individuals, and can change over time, especially during developmental and life stages and with disease. The microbiome is viewed as an integral part of the body. Research has demonstrated the bacteria in the gut interact with the immune system and play an important part in immunity.

The individual species in these gut communities were long considered commensal organisms, meaning they were neither pathogenic nor particularly harmful when in their natural site and in a proper amount – in balance.

The predominant classes or families of bacteria in the gut are Firmicutes, Bacteroidetes, Actinobacteria, and Proteobacteria.

Some of the jobs gut bacteria do are;

Optimal healthy gut microbiota – bacterial balance and composition is different for everyone. The composition of each person’s microbiome is highly variable and can change according to age, ethnicity, location, diet, lifestyle, medications, and environmental factors.  Rather than concentrating on any one commensal bacteria, understanding overall patterns is essential when assessing the impact of individual results.

Many bacteria measured on the GI-MAP are considered opportunistic pathogens since they may only cause symptoms in some individuals, particularly those with compromised immune systems. Many people come into contact with these opportunistic bacteria species  and experience no symptoms at all. They can be considered to be a normal part of our microbiome, however, for vulnerable patients they can cause inflammation and ill health. Symptoms may include diarrhea, loose stools, abdominal pain, or even constipation.

Overgrowth and excessive colonisation by opportunistic bacteria may occur when the commensal (friendly or beneficial) bacteria are impaired by poor diet, antibiotic use, parasitic infection, or a weakened immune system. When intestinal permeability (or leaky gut) is present, these microbes can cause further damage.

Fungal organisms are commonly found in the human digestive tract, but fungal overgrowth may only cause symptoms in those who are susceptible or immune-compromised . Fungal growth is localised in the body and can be found the large intestine,  small intestine or elsewhere in the body including, mouth, vagina, nails etc. Stool profiles provide information only about the presence of fungi in the large intestine, and additional tests may be necessary to understand the complete picture of fungal overgrowth. Organic acid profiles (add link) can also provide useful information about the presence of yeast in the body.

A parasite is an organism that lives and feeds on a host organism at the expense of the host. The GI-MAP tests for pathogenic parasites and protozoa most commonly occurring in the GI tract. Sources of exposure should be identified and eliminated to prevent reinfection.

This part of the test gives information about how well you are digesting and absorbing your food. Ultimately indicating how well your GI tract is performing its basic digestive functions.

It includes the following markers.

A check to see how well the pancreas is playing its part in the digestion of protein fat and carbohydrate. Pancreatic elastase is secreted exclusively by the pancreas and provides insight into the production of the digestive enzymes amylase, lipase and trypsin.

Fecal fats are normally broken down by bile salts and absorbed in the small intestines. High levels of fat in the stool may be an indication of maldigestion, malabsorption of dietary fats.

One of the ways that toxins are removed from the body is via the stool – the toxins  are bound to a molecule that allows them to be removed. Beta-glucuronidase can uncouple these toxins resulting in them being recirculated. Beta-glucoronidase can also break down carbohydrates and help the absorption of some plant polyphenols and nutrients.

The term ‘occult blood’ simply means blood that is not evident to the naked eye and present in microscopic quantities only. Normally, stools should be entirely free of blood. A positive occult blood indicates the presence of free haemoglobin found in the stool, which is released when red blood cells are broken down. Follow-up testing is recommended.

SIgA is secreted by the mucosal tissue of the gastrointestinal tract. Mucosal tissue is strategically located in areas where external pathogens enter the body and it helps to form the protective lining or barrier of the digestive tract to protect us against pathogens and bad bugs and toxins.

Gliadin is a component of gluten, the protein found in wheat and other field grass grains such as barley, malt, and rye. The presence of fecal anti- gliadin antibodies can indicate an immune response (in the gut) to gluten in the diet. Fecal anti-gliadin antibodies do not necessarily correlate with blood levels.

Calprotectin is a simple measure that checks for inflammation in the gut. Calprotectin can be useful for distinguishing between Irritable Bowel Syndrome (IBS) and Inflammatory Bowel Disease (IBD).  Levels can vary with age and children under 10 have higher levels.

Zonulin has been identified as a protein that regulates the tight junctions between the epithelial cells lining the digestive tract  – it acts somewhat like a shoelace to pull the cells together. When zonulin is elevated it has been found to be associated with other markers that all together can indicate the presence of intestinal permeability or ‘leaky gut’.

The GI Health Panel™ is a non-invasive screen of the gastro-intestinal tract and its function. It includes at least 15-22 individual but related tests. Stool and saliva samples are submitted by the patient after home collection.

To insure high sensitivity and specifity of pathogenic organism detection, Diagnos-Techs employs a variety of methods in the GI Health Panel™ tests. These tests utilize proven biochemical and state of the art immunological and other methods. The panel includes:

Common applications of this panel

Individuals with chronic and vague GI symptoms including:

SIBO- Small Intestinal Overgrowth can be added to the GI Health Panel or as a stand-alone test. SIBO occurs when the bacteria in your small intestine becomes unbalanced and overgrows.

Symtoms of SIBO can include:

Essential Health is dedicated to providing professional, safe and effective complementary health care through the use of research and evidence based on natural medicine therapies.